When the EFILive application reads or flashes a controller the details of the read/flash process may be saved in trace files for diagnostic purposes.

Trace files are created on your PC or laptop in the folder: \My Documents\EFILive\V7.5\Bug reports and are named using the following naming convention:

Please make sure you select only the relevant file(s) based on the date and time in the file name.

Once the report is generated, click the [Save] button on the report to save the file.

Locate the "EFILive Tune Tool" or "EFILive Scan Tool" desktop icon of  the application that you wish to log. Right click the icon and select  "Properties". Append the following three characters to the Target field:   /l (space, forward slash, lower case L) as shown in the image below: 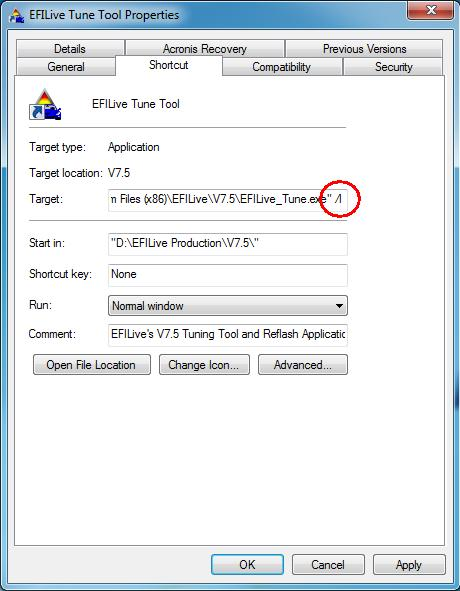 Then run the EFILive V7.5 software using the modified shortcut until you have reproduced the problem.

The support file will be saved in the \Program Files\EFILive\V7.5  folder, it will be called StartupLog.txt. On some systems, the EFILive  V7.5 application cannot create or save the StartupLog.txt file in the  "Program Files" folder unless it is started with administrator  privileges. To do that, right click on the EFILive desktop icon and  select "Run as Administrator".

15 of 25 people found this page helpful