Trace files are automatically saved for read/flash processes when communicating with a controller in pass-thru mode.  Users can manually save trace files where options do not perform the desired outcome.

Trace files are created on your PC or laptop in the folder: \My Documents\EFILive\V8\Trace and auto-generated trace files are named using the following naming convention:

To manually generate a trace file, after the error occurs in EFILive V8 Scan and Tune software, open the EFILive Control Panel and navigate to [F8: Trace] and select [Save Trace]. Users can set the trace file name and save location during the [Save Trace] process. 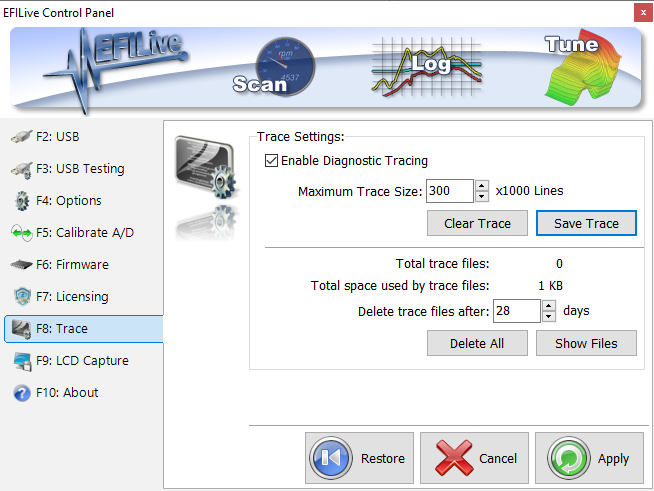 To force any of the EFILive V8 applications to create a log file, hold down one of the Ctrl keys on the keyboard when starting the application. The application's start up log will be saved in the folder: \My Documents\EFILive\V8\Trace

Each application will save a log file with a unique name:

NOTE: If you are starting EFILive V8 Scan and Tune from the desktop icon, and you hold down the Ctrl key when double clicking the icon, unexpected (but technically correct) things happen:

13 of 27 people found this page helpful